.
Overall Satisfactionc65
Also this is hands down an amazing game.
This is the best online game I've ever played.
online connectivity is very poor and it is an online game.
and I definetely recommend this game.
I would not recommend this game to my worst enemy.
This is one of my favorite games one my iPod.
Good game need to have alliances join me 32g2696.
Fun & Engagingc90
Awesome game use this code and I'll help you out.
What has happened to this awesome game.
This game is very fun and addicting also use my invitation code.
This game is really addictive so start playing now.
Love this game can be hard to put down.
people are friendly and it's a good game to kill time.
This game is addicting and super fun.
It's a fun time sink.
Usefulnessc28
I play everyday.
Use this code for gifts and helpful tips -I am Haumea.
Helpful tips to the developers.
Value for Moneyc28
You really can enjoy this game without spending any money.
Replay Valuec70
Interesting strategic game.
endless hours of fun.
Social Aspectsc53
It is also very fun meeting new people.
More fun with friends to back each other's back.
Great social and cooperative game.
Ease of Usec17
It's a simple strategy game.
Reliabilityc25
The game is full of surprises.
Security & Privacyc37
Updates & Supportc10
Tip: Get the deluxe version.
Even the Deluxe version doesn't work.
If your looking for a good game to play check this game out. found in 11 reviews
Just message me in game. found in 3 reviews
The game is a time base game very similar to ogame. found in 3 reviews
This game is cool my invite code is 1b6gab20. found in 5 reviews
Hi my name is ztrharris. found in 4 reviews
Great little time waster. found in 5 reviews
endless hours of fun. found in 4 reviews
Im plaing it since december 11 and i love it. found in 3 reviews
Great for passing time. found in 2 reviews
Awesome game use this code and I'll help you out. found in 210 reviews
Join today with code 4dg31b5 and join TheBrotherhood Alliance. found in 7 reviews
This game is great and loads of fun. found in 4 reviews
I am Ursa Major from the server loppen. found in 68 reviews
You really can enjoy this game without spending any money. found in 3 reviews
This game is like the best game in the world. found in 2 reviews
: 24ga43 Very nice game. found in 5 reviews
This game is addicting and super fun. found in 8 reviews
This is my favorite iPad game /app ever. found in 3 reviews
The game gives you 26 tasks to get started. found in 5 reviews
Use my activation code plz 7cgca79 when registegistering. found in 6 reviews
Anyone having connection issues right now. found in 2 reviews
and the incessant advertisements by the developer to spend money. found in 54 reviews
Not a game of spend if you want to win. found in 13 reviews
doesn't respond to attempts to contact. found in 10 reviews
Tech support will do little to nothing for these issues. found in 9 reviews
BUGS AND MUCH MORE THINGS AND REASONS FOR WORST GAME. found in 9 reviews
Bug ridden and full of errors. found in 3 reviews
but tap4fun has awful customer service. found in 36 reviews
Why is there no way for me to log in to my account. found in 8 reviews
greedy developer. found in 3 reviews
Only 3 stars cause of aformentioned connection issues. found in 10 reviews
but those who are willing to spend lots of money have serious. found in 7 reviews
total lack of developer support. found in 4 reviews
Great but way too many bugs. found in 3 reviews
I keep getting an error message saying error 500. found in 9 reviews
If the game developers can't be bothered why should I. found in 9 reviews
Constant glitches. found in 6 reviews
the game is kind of clunky and buggy. found in 1 reviews
No fun to start over every time you eant to play. found in 41 reviews
Do yourself a favor & don't download this game. found in 24 reviews
To make things worse last update makes the game unplayable. found in 13 reviews
I cannot return to the game after applying to an alliance. found in 23 reviews
the game is basically unplayable due to lag and connection issues. found in 10 reviews
I would not recommend this game to my worst enemy. found in 14 reviews
Do not spend a dollar of real money on this game. found in 23 reviews
Having spent months building up forces. found in 14 reviews
but the servers has some many issues makes the game really bad. found in 15 reviews
Do not play this game until they work out all the bugs. found in 49 reviews
If you want to build a fleet it could take weeks. found in 38 reviews
This is unjust and has ruined the game of more experienced players. found in 14 reviews
Update forces you to spend money. found in 54 reviews
Don't waste your time unless you plan on using real money to play. found in 11 reviews
Needs mods on the new server. found in 27 reviews
Many who spent their money on this game have been ripped off. found in 19 reviews
No response from multiple attempts to customer service. found in 36 reviews
No way to contact developer from app. found in 10 reviews
Nothing but Error code 502 and error code 504. found in 10 reviews
New players are farmed on heavily and unable to progress. found in 34 reviews
If you are iPhone and iPad owner,you now can download Galaxy Empire for free from Apple Store. The application is supporting English language. It weighs in at only 17.8 MB to download. The new Galaxy Empire app version 1.5.2 has been updated on 2014-11-28. For ensuring consistency with the device you should take into account the following app compatibility information: Compatible with iPhone, iPod touch, and iPad. Requires iOS 4.0 or later.
Bottom Line: For more information about Galaxy Empire check developer Tap4Fun`s website : http://tap4fun.com/galaxy-empire/

After soaring through space for months, you`ve finally arrived on an unfamiliar planet with the mission of colonizing it. It`s time to build your galaxy empire. You`ll have to collect natural resources, construct buildings, wage wars ... 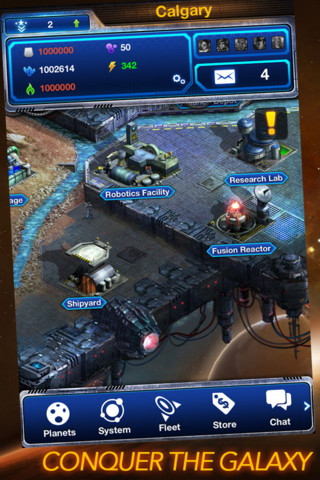 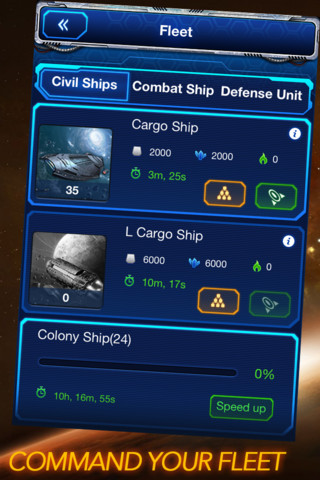 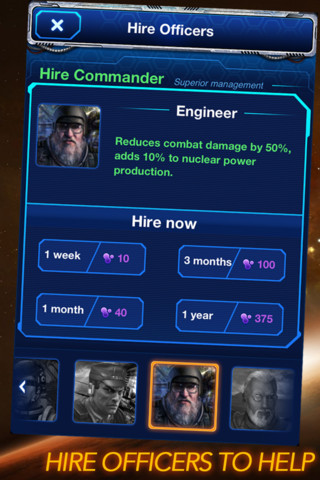