.
Overall Satisfactionc68
This is an awesome game for those who love to sing.
If u like to sing then buying the song is valuable.
and it will b THE best karaoke app ever.
What's not to love.
Awesome app for anyone who loves to sing & anyone who loves Glee.
and sing all your favorite songs from glee with background music.
I recommend this app to anyone remotely interested Glee.
The Glee App is absolutely amazing.
I recommend this app for all glee lovers.
Fun & Engagingc77
It's soooo much fun to sing along and be able to listen to yourself.
The effects make this app super fun and addictive.
This is an awesome game for those who love to sing.
This app is so much fun and addicting.
My spouse and I do duets and we sound awesome.
The funky auto-tune makes it loads of fun.
This app is sooo much fun.
Value for Moneyc31
Got to use real money.
Replay Valuec62
3 love to sing on this app and it never gets old.
Never Gets Old.
This app provides me HOURS of fun and a creative outlet.
Hours of fun.
Production Valuesc62
with the same great voice effects.
This app need more voice effects.
Reliabilityc49
It is easy to work and is really fun to use.
Updates & Supportc75
they should be able to get the karaoke version.
Excellent customer service /excellent Fun App.
Loving the new update.
Other than that I have been having a blast with it. found in 3 reviews
It's like guitar hero : I can see where my voice is. found in 3 reviews
i luv the song shout out n defying gravity. found in 2 reviews
Get the app "checkpoints" and u could get a $ 25 iTunes card. found in 1 reviews
listen to other people's Perfomances and listen to your own Performances. found in 14 reviews
Up all night singing my heart out. found in 3 reviews
Greatest thing since slice bread. found in 1 reviews
Thanks Smule for such a fun and entertaining app. found in 4 reviews
I have never even seen the show. found in 2 reviews
More fun than a barrel of monkeys. found in 2 reviews
Someone has jar of hearts on the globe. found in 2 reviews
Spending money on iTunes never sounded so sweet. found in 1 reviews
Thank you smule for creating this app. found in 5 reviews
This app provides me HOURS of fun and a creative outlet. found in 3 reviews
I love hearing myself sing on this app. found in 4 reviews
the glee karaoke update is fantastic and addictive. found in 45 reviews
Good variety of songs :D. found in 6 reviews
fun & I can rock out as much as I want. found in 5 reviews
This app is so much fun and addicting. found in 7 reviews
Now it's constantly crashing and running super slow. found in 2 reviews
Love Glee but I'm stuck on level 5. found in 10 reviews
seriously needs some mic/music volume adjustments. found in 1 reviews
However I have NO clue what's going on. found in 1 reviews
because after a while it gets boring. found in 4 reviews
You guys have to fix the ipod touch 2G bug. found in 13 reviews
I luv it except that I can't log out of my account. found in 1 reviews
Only problem is I can only sing one song before it crashes. found in 7 reviews
I don't really like the pay for EVERY song thing. found in 23 reviews
Please give us free previews again. found in 1 reviews
Except personally I think they should add more songs for grab. found in 101 reviews
The mic doesn't work on itouch 4g. found in 3 reviews
I love it but the songs are way to exspensive. found in 5 reviews
please put some one direction songs on here please. found in 3 reviews
but I hate the new update. found in 2 reviews
and there's no way to change the key of the songs. found in 5 reviews
Ugh it wont let me rate it. found in 2 reviews
You should make an update to fix bug fixes or else five stars. found in 13 reviews
Please answer anyone :
And how come I can't buy songs with tokens. found in 8 reviews
I do think the app needs an update on song choices. found in 6 reviews
99 per song - really disappointing. found in 25 reviews
More song selection would be a plus. found in 29 reviews
I hate how you get one song. found in 44 reviews
Why can't there be a free song weekly or something. found in 174 reviews
I think it's stupid you have to earn or buy songs. found in 30 reviews
com if you really want to sing and record karaoke. found in 48 reviews
Wish get my money back useless without purchasing songs. found in 28 reviews
It makes you sound worse. found in 14 reviews
I can't get it to work for any of my song. found in 18 reviews
Then to learn you have to pay for each song is ridiculous. found in 45 reviews
But you have to buy every single song except Twinkle Twinkle Little Star. found in 82 reviews
The Glee Karaoke is now available as a free download on Apple Store for both iPhone and iPad owners.The application is supporting English language. It weighs in at only 10MB to download. It is highly advisable to have the latest app version installed so that you don`t miss out on the fresh new features and improvements. The current app version 3.2.2 has been released on 2014-11-07. The Apple Store includes a very useful feature that will check if your device and iOS version are both compatible with the app. Most iPhone and iPad are compatible. Here is the app`s compatibility information: Compatible with iPhone, iPod touch, and iPad. Requires iOS 3.1.2 or later.
More Info: Find more info about Glee Karaoke in Smule`s Official Website : http://glee.smule.com

The 1 music app in 17 countries, Glee Karaoke makes you sound like a star. Sing your heart out to songs from the hit TV show while a little magic helps you sound amazing. iPod touch ...
​ 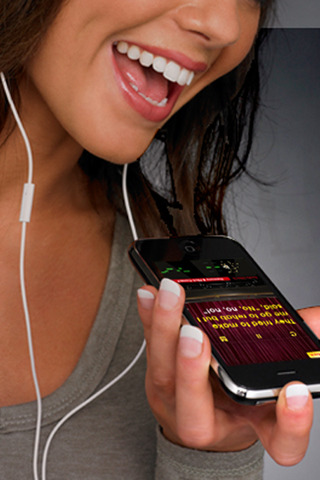 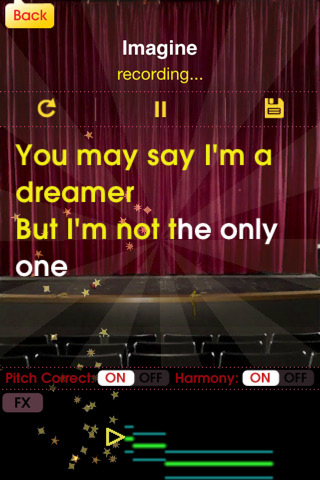 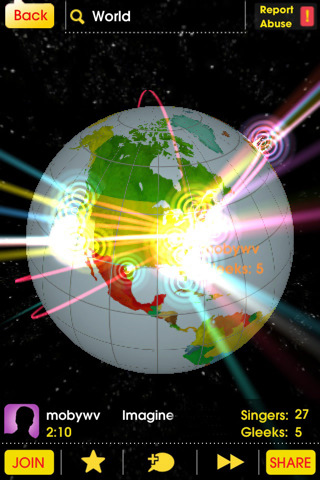