.
Overall Satisfactionc91
Yess I love this game I love rage comics yeaaaaaaaaaa.
Amazing game that will satisfy anybody that reads rage comics.
Dis is the best game evar But needss more WEAPONS.
Good game really fun get more guns doe.
I love this game because I love memes and rage comics.
one of the best games their sould be more meme shooters.
This is one of my favorite games you guys should make more.
My favorite game gone to waist after a silly update.
Best fricken game I've ever played cause ima fricken rrraaagggeee.
Fun & Engagingc91
Awesome game graphics it's awesome and the faces r funny.
This game is funny just like the comics.
Dis is the best game evar But needss more WEAPONS.
The best and the most addicting game ever.
Good game really fun get more guns doe.
and the most important thing- its super fun and addicting.
Really fun game you should get.
Sad because it looks like a really fun game :.
The game is freaking awesome needs more levels.
Value for Moneyc67
so u don't have to buy default weapons with real money.
Replay Valuec87
Make more levels or something.
Last boss level make him turn around then start shooting him.
This has to be the most entertaining game I have ever played.
This game is retarded and it's the stupidest game I have ever played.
Fun and challenging I just finished the game too.
Little bit repetitive though.
Hilarious fun addicting and challenging.
Production Valuesc61
the sound effects to your current weapon turns off.
Funny sound effects are good.
Ease of Usec90
Fun simple game with a fresh splash of humor and gore.
Great simple game to pass the time.
Not sur y I pla le gam blacks out.
Reliabilityc46
Updates & Supportc42
I've never seen a company more dedicated to customer service.
Keeps me entertained and a great way to pass time. found in 13 reviews
fap fap fap fap. found in 16 reviews
I like this game alot I love rage comics. found in 5 reviews
I really like it a lot it's a good time killer. found in 7 reviews
Best run and gun game I ever played with stick figures. found in 6 reviews
The laser beam is the Spartan laser from halo. found in 4 reviews
Wow this is the best rage game eva. found in 15 reviews
Mother of god this game is perfect. found in 10 reviews
Whether you Me Gusta this app or just plan B. found in 3 reviews
This is the best meme game ever made. found in 15 reviews
It's better than Angry Zombie Birds. found in 3 reviews
Since latest update the game crashes every time. found in 12 reviews
It crashes wayyyy to much it's annoying. found in 16 reviews
FIX THE CRASHES PLZ. found in 5 reviews
Still crashes when I try to play story mode. found in 7 reviews
but it keeps crashing on my iPod touch 2nd generation. found in 13 reviews
also your being very greedy with the prices for weapons. found in 7 reviews
Should be able to unlock weapons permanently without buying them. found in 5 reviews
but then I won't let me play the next one :. found in 14 reviews
Seems like ALOT of fun but crashes after the scene of dr. found in 5 reviews
Update makes it crash can't play anymore :. found in 22 reviews
It keeps crashing every time I try to play. found in 21 reviews
and it won't stop crashing. found in 4 reviews
New update makes it crash when you start a level. found in 7 reviews
Whenever i try to play it crashes. found in 6 reviews
Cant play because screen is cut off plz fix. found in 15 reviews
The game crashes when the weapon boosts end for some reason. found in 36 reviews
the app still crashes whenever enter gameplay. found in 3 reviews
Crashes way to much now that the update is up :/. found in 16 reviews
CREATORS
After update it won't let me play at all. found in 14 reviews
Worked great fun game but update makes it crash and unplayable. found in 9 reviews
Now it just crashes everytime I select a level. found in 11 reviews
Y u no work on 3rd gen iPod. found in 8 reviews
Now every time I try to play a level the game crashes. found in 16 reviews
Crashes every time I try to play it since the update. found in 21 reviews
After the new update it crashes every time I try to play story mode. found in 16 reviews
I have a 2nd gen iPod and it says it's compatible. found in 8 reviews
I can't even play the game because it crashes so much. found in 22 reviews
Y U NO FIX CRASH. found in 12 reviews
It shuts down and goes to my home screen. found in 18 reviews
This Game was the Absolute worst Game I ever Played. found in 8 reviews
Every time I start story mode the game closes. found in 41 reviews
Every time I try to play anything the game crashes. found in 209 reviews
cant play it for 5 seconds without it crashing. found in 15 reviews
If you are iPhone and iPad owner,you now can download Rage Wars for free from Apple Store. The application is designed for use in English language. It weighs in at only 15.8 MB to download. It is highly advisable to have the latest app version installed so that you don`t miss out on the fresh new features and improvements. The current app version 1.4 has been released on 2014-11-01. For ensuring consistency with the device you should take into account the following app compatibility information: Compatible with iPhone, iPod touch, and iPad.Requires iOS 4.0 or later.
Bottom Line: For more information about Rage Wars check developer MUGOCO Inc`s website : http://www.lemondoo.com

Watch trailer on youtube: http://www.youtube.com/watch?feature=player_embedded&v=k0jG-X4k4SE Get prepared for the FIRST EVER shooter game based on Rage Comics Rage Wars is a well made action game with a variety of weapons, worlds and enemies to challenge with. ... 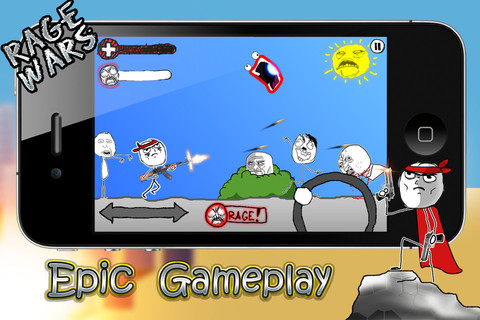 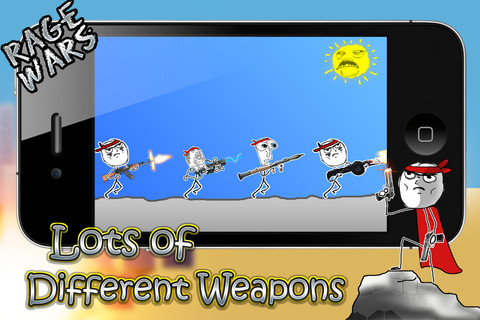 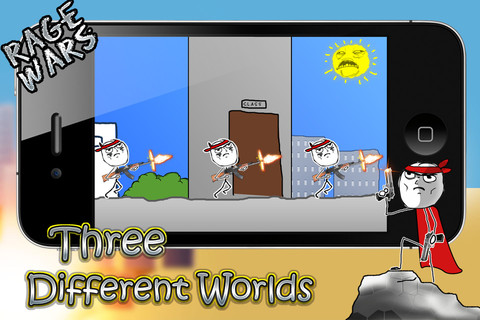 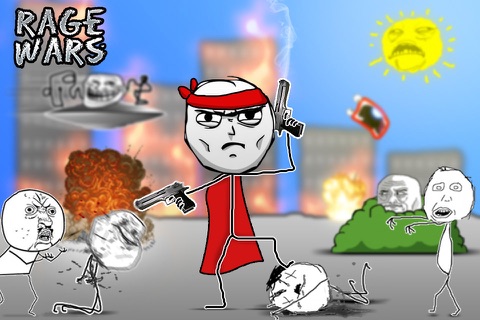 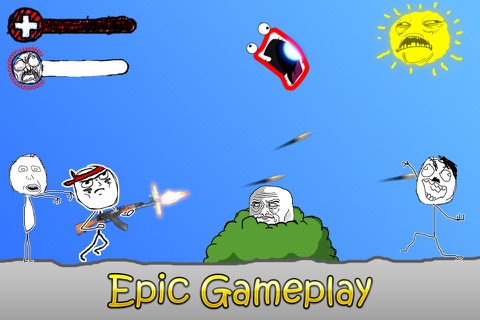 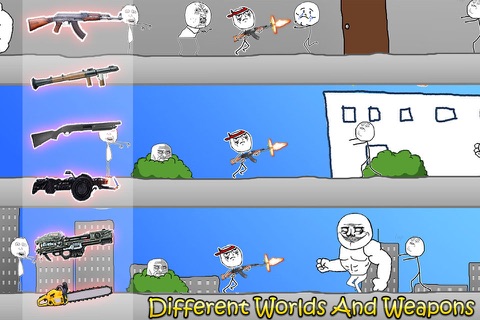 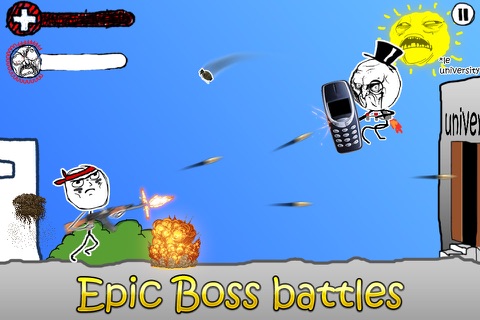 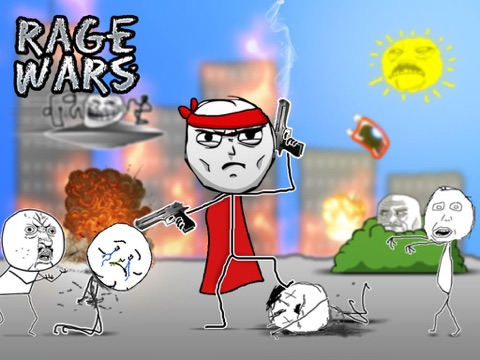 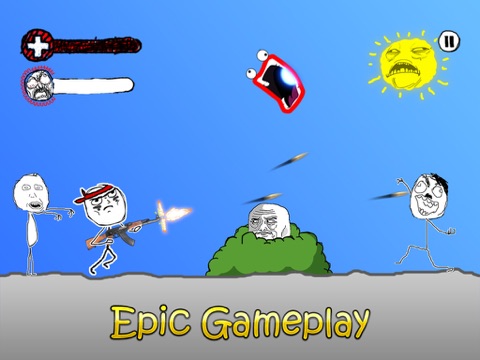 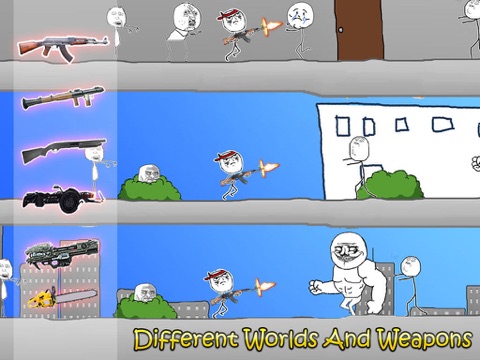 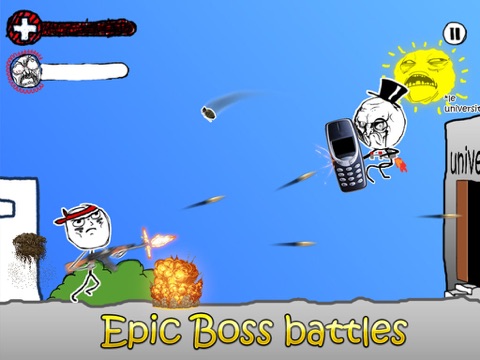