Kaisatec , the publisher behind many iOS app (iCheckList For iPad ,Screensaver Lite For iPad ,eTransfer For iPad ,Mahjong Solitaire 2014 ,Lotto Wizard ,Bandwidth), brings Screensaver For iPad with a number of new features along with the usual bug fixes. Screensaver For iPad app has been update to version 2.1 with several major changes and improvements. App release that improves performance, provides several new options.
.

The Screensaver For iPad is now available for $1.99 for iPad owners. The application is designed for use in English language. It weighs in at only 14.7 MB to download. It is highly advisable to have the latest app version installed so that you don`t miss out on the fresh new features and improvements. The current app version 2.1 has been released on 2014-11-06. For ensuring consistency with the device you should take into account the following app compatibility information: Compatible with iPad. Requires iOS 3.2 or later
Bottom Line: For more information about Screensaver For iPad check developer Kaisatec`s website : http://www.kaisatec.com

An easy-to-use screensaver maker It provides you function to add, edit, make the screensaver using your favorite photos and music. Professional user interface and very easy to use. Choose from transition effects for your screensaver. Multiple music ...

I spent a good couple of hours making a screensaver editing pix audio and setting title sadly there are no simple effects available to chose from like fade dissolve etc After I was done I tried to run the screensaver only to find it crashed I turned off my iPad turned it back on same thing Its a shame coz this app has potential and I hope the authors of this program will fix the bugs and add some standard transition effects advanced ones would be even better If this app gave its buyers what they promised in the description and everything worked well I would rate this app a 5        Very Buggy App crashes after making SS
It has so many bugs it has to be rewritten from scratch     It has potential but
Same thing happened to me Spent time to create screensaver Then it would crash every time i clicked on it Too bad it was really cool when I had it working     Crashing issue
By Kostas Gar.
​ 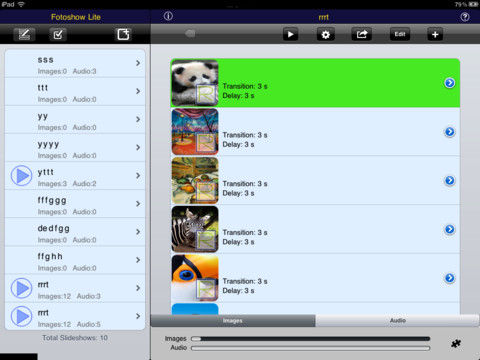