Why I Party There™

Description - Why I Party There™

M.A.D. Men , the publisher behind many iOS app (Why I Party There™ ,nICE2MELTu™ Chat with Nearby People ,LOGOpedia: Eye-Q`s), brings Why I Party There™ with a number of new features along with the usual bug fixes. Why I Party There™ app has been update to version 1.5 with several major changes and improvements. App release that improves performance, provides several new options.
.

The Why I Party There™ is now available for $0.99 for both iPhone and iPad owners.The application is supporting English language. It weighs in at only 1.8 MB to download. It is highly advisable to have the latest app version installed so that you don`t miss out on the fresh new features and improvements. The current app version 1.5 has been released on 2014-11-01. For ensuring consistency with the device you should take into account the following app compatibility information: Requires iOS 3.2 or later. Compatible with iPhone, iPad, and iPod touch.
More Info: Find more info about Why I Party There™ in M.A.D. Men`s Official Website : http://www.madmenapps.com/wipt

The app hows some great updates in this new version what a perfect app for the Service Industry and great features for bar owners                 Perfect
What a great way for nightclubs to see what the competition is doing Way to go Mad Men                 Great idea
Great way to meet friends and plan the party                 Finally an real party app
Buy it                 Awesome
great app                 awesome
I downloaded this app without knowing much about it or exactly what it was meant for After playing with it I see the genius in it Its a great concept and I hope it generates the critical mass needed to make it awesome What a great idea for bartenders to develop a followingand when they dowhat a great app for partiers to use the app to find out where others are going I can see this taking off and being used more than Yelp or Foursquare or other apps just based on the simple fact that people can determine where to go based on the votes others are giving to bartenders Cool Im staying onboard til this one generates enough users Should be very cool                 A Very Cool Concept
Love this app Instead of sorting through many other apps and reading countless reviews this app simplifies it all by just communicating where other people like to party based on voting for the stafflike bartenders servers etc The app looks great and has a simple user interface Once more people start using the app in cities everywhere it will be my first and only choice for determining where to go party                 A better hamster wheel
By Kostas Gar.
​ 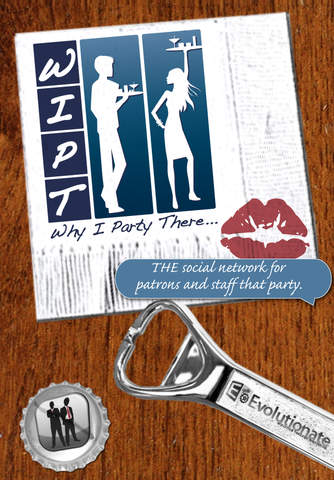 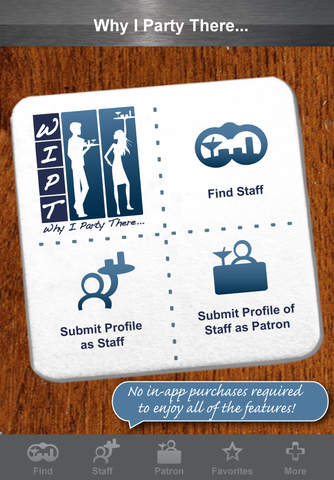 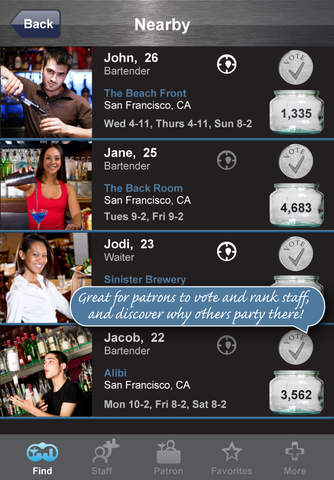 More in Food & Drink -Why I Party There™