Tim Leasure , the publisher behind many iOS app (Tromba Musica ,Arban and His Method ,Wotton Dictionary of Music ,Mahler Translations), brings Tromba Musica with a number of new features along with the usual bug fixes. Tromba Musica app has been update to version 1.0.3 with several major changes and improvements. App release that improves performance, provides several new options.
.

The Tromba Musica is now available for $0.99 for both iPhone and iPad owners.The application is designed for use in English language. It weighs in at only 0.6 MB to download. It is highly advisable to have the latest app version installed so that you don`t miss out on the fresh new features and improvements. The current app version 1.0.3 has been released on 2014-11-07. For ensuring consistency with the device you should take into account the following app compatibility information: Compatible with iPhone, iPod touch, and iPad.Requires iOS 3.0 or later
Bottom Line: For more information about Tromba Musica check developer Tim Leasure`s website : http://www.trombasoftware.com/

Tromba Musica is a database of solo and chamber literature for the trumpet. Users can browse the database based on the composer`s last name, or can search the database by composer name, title of composition, ...

First the good There is a TON of music in this app and it is a good way to discover new stuff It is a great idea Now the bad First of all this app crashes ALL THE TIME They need to fire their software guy Secondly while the app has a ton of obscure pieces there are a lot of fairly standard pieces that arent to be found Ex Riepel Stamitz Querfurth and Bohmes only piece listed here is the Concerto Thirdly as other reviewers have said it would be nice to include score excerpts and audio clips Fourthly IT CRASHES ALL THE FREAKING TIME Worth it Eh Maybe That is all        Cool idea poor execution
awesome app has all the dolled Ive played EXCEPT arbanso no carnaval of Venice                 great for any trumpet player
By Kostas Gar.
​ 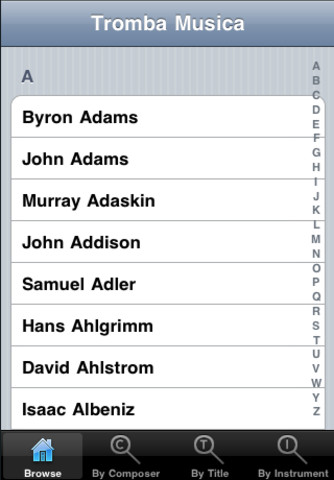 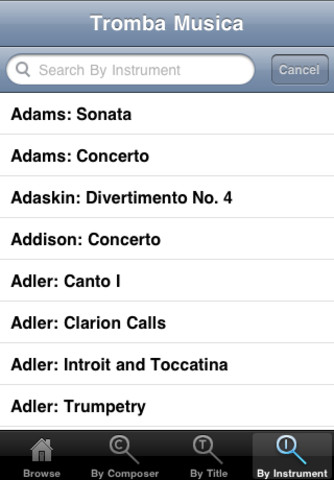 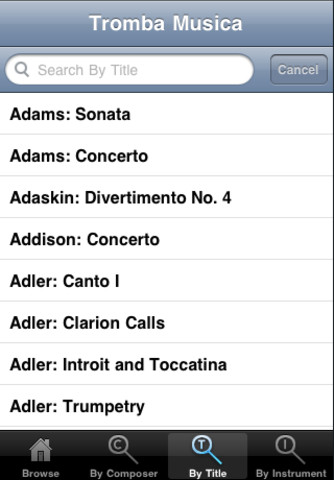